No matter where you are from, you will fall in love with Taiwan at first sight!

Under the river of time and modernization, this kind, warm land still preserves its

traditional culture and a beautiful heart.

This time, Dear b&b opens the chapter of Taiwan’s traditional culture and brings you

the sincerity and warmth hidden within.

Taiwan is warm, enthusiastic and sincere, the beautiful isle known as Formosa with which you will fall in love at first sight. Over hundreds of years, various ethnic groups and cultures have converged within Taiwan, giving rise to a unique way of life. Follow us through the first part of this issue, and you just might find out the reason for those big smiles on the people who travel to Taiwan. 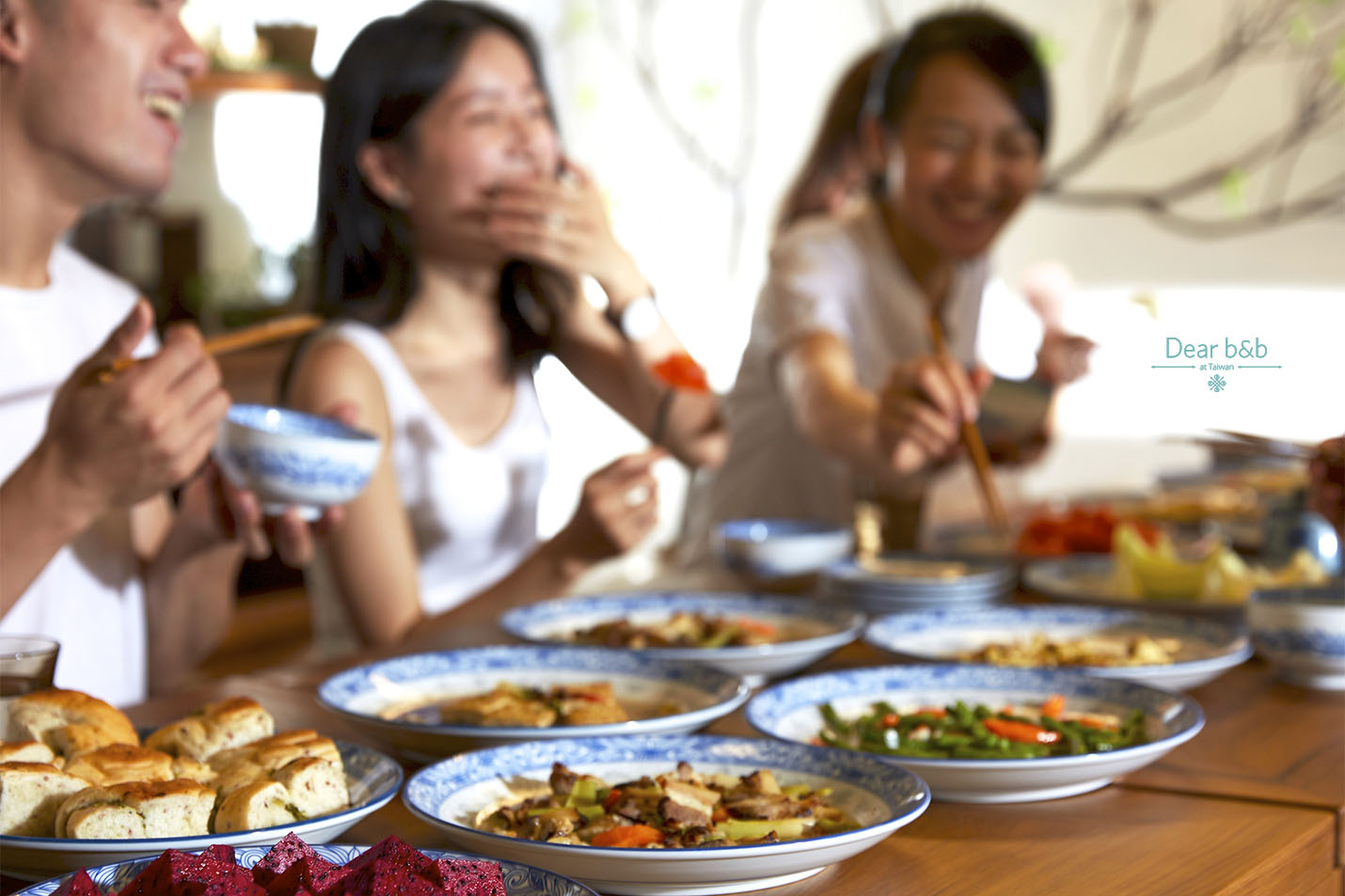 Keywords for describing the Taiwanese people: warm and friendly

When speaking of the Taiwanese people, many might immediately think of their hospitable, kind personalities. This is particularly true in central and southern Taiwan. Locals there are famous for having a friendly, honest personality that is as uplifting as the sun. The close connections between each farming household even serve to enhance this quality. Gathering in courtyards to eat a meal, offering to buy each other food, passing dishes around the table and cheering with glasses of beer are usual scenes among families and neighbors in the countryside, and among indigenous tribes in the mountains.

With sincerity and trust, Taiwanese people treat each other with honesty and respect, which allows travelers to feel at ease in a completely unfamiliar environment. Leaving your personal belongings on your seat at a café when you use the restroom, or using a bike-sharing service on the streets, are natural experiences that warm the hearts of every foreign traveler. 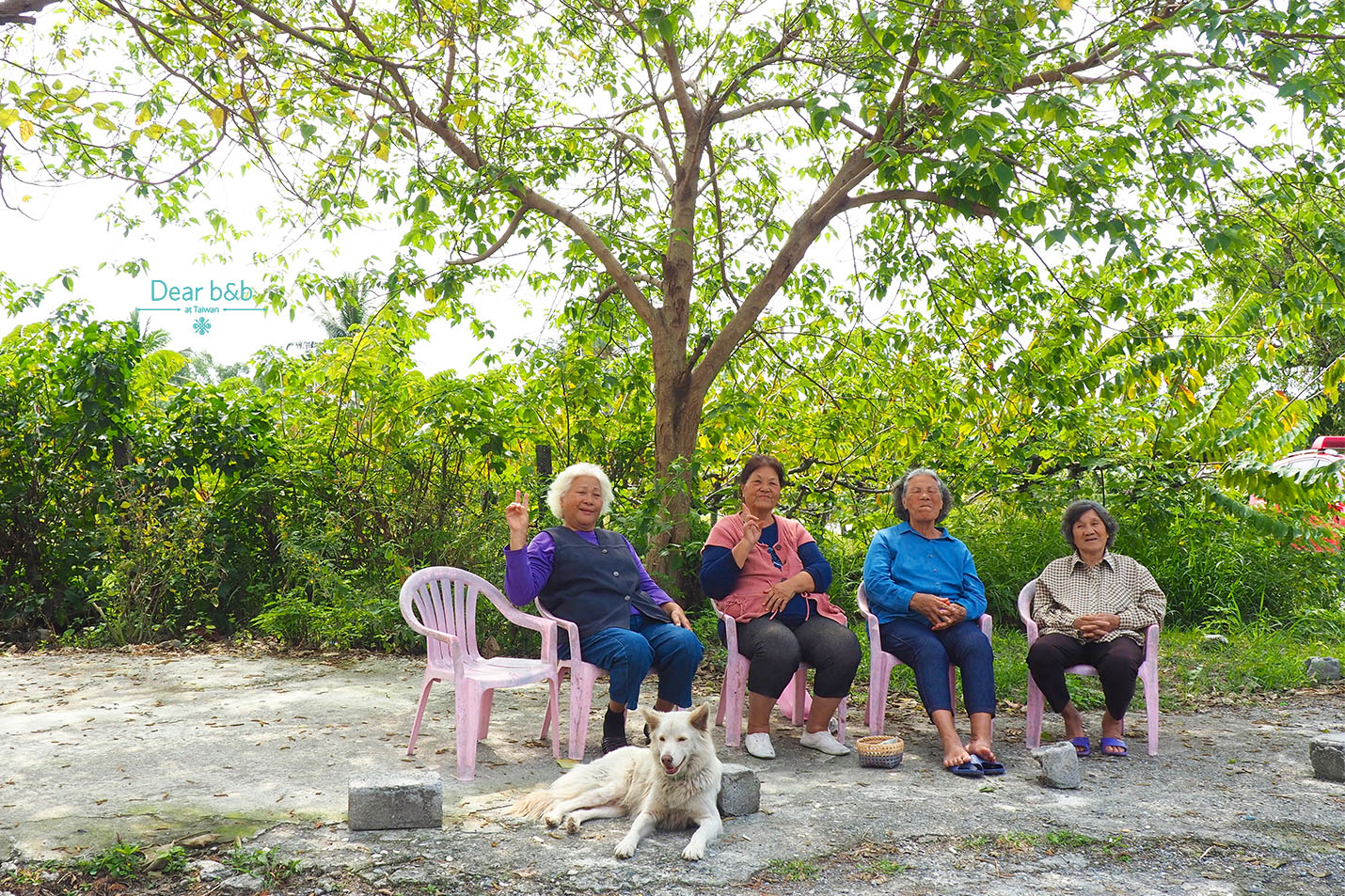 Cruise between heritage and daily scenes

Taiwan’s daily scenes are as fascinating as its people. You may find residences in the countryside that leave their doors unlocked and open all year round, allowing you to take a peek through screen windows at what an ordinary living space looks like. If you travel to a small town or a fishing village, you may see local seniors gathering in front of townhouses or under big banyan trees, leisurely chatting with each other.

On the other hand, Taiwan has preserved an abundance of diverse historic buildings, such as the long-shaped street houses with beautiful ornamental tiles and unique iron window grates in the alleys of Tainan City’s downtown and Anping areas. Further examples can be found in such three-building courtyard homes as the Lin-Jia old residence in Taoyuan, Yong-An residence in New Taipei City and Wufeng Lin’s residence in Taichung City. Three generations playing, chatting and having tea in the courtyard was a typical scene in Taiwan’s olden days. Moreover, reputable temples like Taipei’s Lungshan Temple, Hsing Tian Kong, and the Taipei Xia-Hai City God Temple that is particularly famous for relationship blessings, are not only a vehicle for such fond childhood memories as following grandparents to pray for an auspicious year to come, but also an art gallery to appreciate the magnificent, detailed sculptures and roofs constructed using traditional techniques.

Even the presidential office building in Taipei City is open for the world to explore. They have recently begun a fun campaign, inviting foreign travelers to spend a night within the building. This red-brick, baroque-style presidential office building was built during the Japanese colonial period and passed down to the Nationalist government over a century ago. Throughout all this time, it has stood solemnly in the center of Taipei city, where it now welcomes the world to come and explore Taiwan. 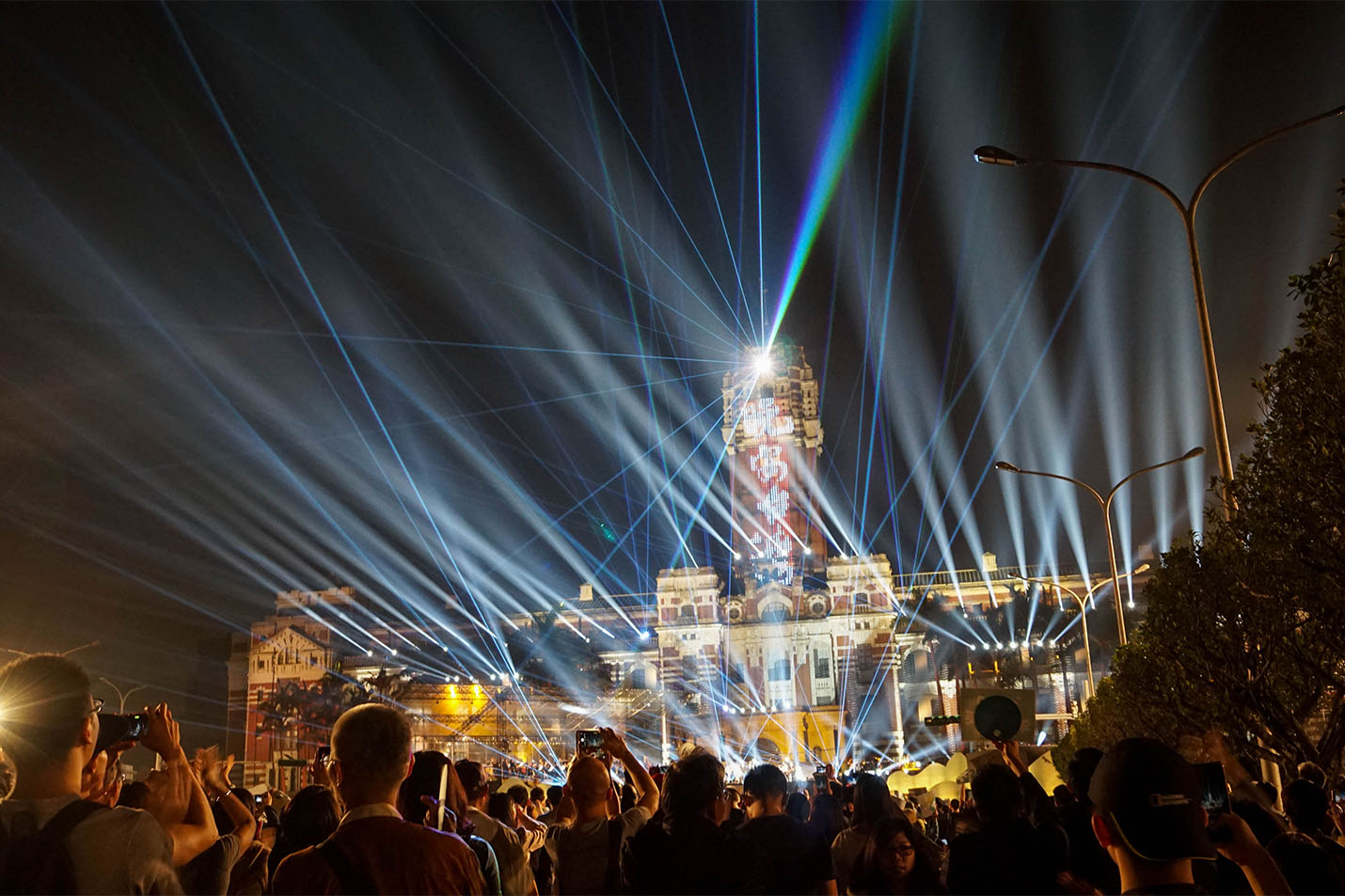 Experience and remember the beauty of traditions

Besides observing such aspects as the people and the architecture, Taiwan’s traditional living culture is also apparent within day-to-day miscellany. For instance, you may notice a teapot or metal container filled with hot tea on the side of some road, on some farmland or somewhere in the mountains. This is the tea-offering culture which allows hard-working farmers and tourist passers-by to take some time off and enjoy a refreshing cup of tea. Chihshang Township in Taitung County and Chaishan area in Kaohsiung City are two good destinations for experiencing this distinctive culture.

Not to mention the countless pilgrimage parades and festivals held by temples around Taiwan. The lively, festive pilgrimage parade for the Goddess Mazu held by Jenn Lann Temple in the Dajia District of Taichung City spreads across several townships and counties. People who have firm belief in Taoism see putting the first incense stick in an incense burner in an acclaimed temple as one of the most important tasks to be performed on the first day of the Chinese New Year. Free lucky charms and traditional Taiwanese snacks like stir-fried rice noodles or savory tangyuan are often offered to those who take the time to make a trip to attend these religious activities. Seize the chance to participate in one of those events, and learn just how much Taiwanese people relish festive activities and the associated longings for peace and prosperity.

Fond of the idea of bringing Taiwan’s everyday-scenes back as a souvenir? Dihua Street in Taipei City, also known as the Dadaocheng area, is definitely a good place to go. Dihua Street is not only famous for Chinese New Year supplies, but also for various choices of Chinese medicines, dry ingredients, traditional sweets, even the bamboo and wooden kitchen wares and colorful shopping tote bags that you will only find in a local grandma’s kitchen. Telling stories of Taiwan’s olden days, these nostalgic shops in red-brick buildings along Dihua Street are Taiwanese scenes from days gone by that you simply should not miss. 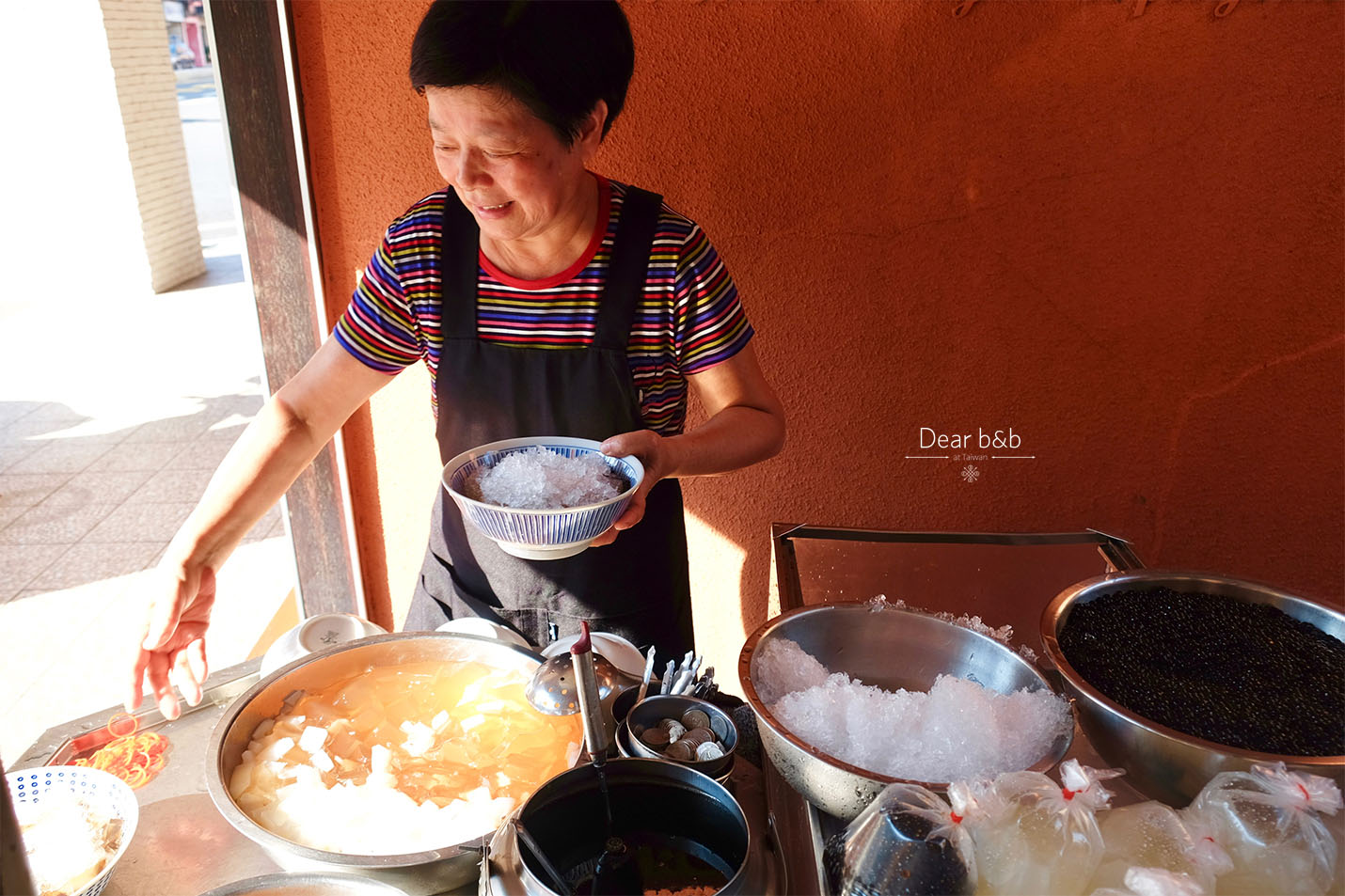 Why not travel to Taiwan and explore the diverse culture, temples and old street houses, teapots under big trees and dining with the locals? The miscellaneous beauty and the sincere interaction among people will impress you and cause you to fall in love with this country.

There must be at least one reason for you to fall in love with Taiwan.

It might be the friendly people, the marvelous landscape,

or the taste of traditional culture.

Now, follow Dear b&b and book a room in one of these traditional guesthouses to

The buildings along Guanxi Old Street portray life in this small township. Past Nanshan Bridge and Fengshan River, a traditional courtyard home sits at the base of the Nanshan hills with its stacks of red bricks and layers of stone tiles. An elegant calligraphic couplet above the door reveals the hundred-year-old history of this house.

Wandering through the alleys between the old houses and the bustling Shuixian Temple Market, every turn you take brings you further back into your childhood. On Gonghou Street, an old house stands – Back to the Old Tainan Guesthouse with warm yellow lights to transport you to former times.

Along the straight country road and the rice paddies with farmhouses scattered throughout, you follow the road signs onwards, and approach your destination: Chang House, a classic traditional Yilan residence in perfect harmony with the natural world, and enveloped in a breeze rich with the aroma of rice.