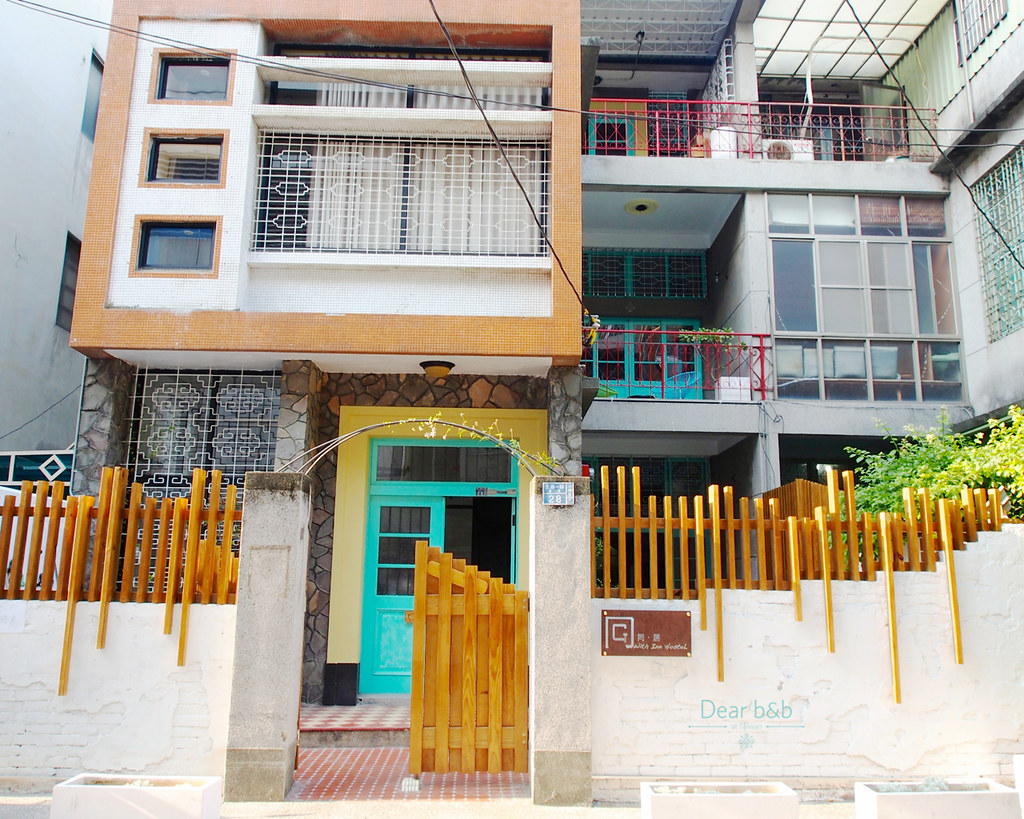 Let the host know that you are a Dear b&b reader when booking, and you will get a limited postcard upon checking in!

Lingering in the flourishing New Kujiang Shopping District, you turn down an unassuming alleyway humming with the happenings of everyday life. Farther in, a facade composed of white walls and wooden railings catches your eye. The house in front of you appears youthful and tidy, yet seems to conceal an old soul. The clematis climbing the arch above the entranceway appears like a rainbow of memories, telling the stories of old Kaohsiung City. This is With Inn Hostel—a hostel infused with both new and old, meticulously created by hostess Shing and host Hong. 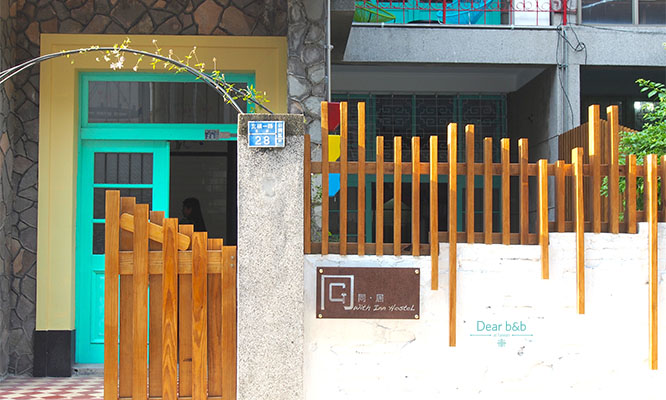 A waltz to melodies both new and old

Entering the front yard of With Inn Hostel, you spot a sign made of wood with a metal arrow pointing the way towards reception for you. On the path to the reception desk, you are greeted by lovely potted plants such as red maple, Boston fern, and cacti of various shapes and sizes. If you walk slowly enough, you might hear the floor tiles underfoot gently tell the history of this old house.

In the small check-in area, the smell of days gone by fills the air, transporting you back to the Taiwan of fifty years ago. You appreciate the traditional terrazzo floors, the wooden doorframe, and the antique cabinet formerly used to store condiments. The exquisite ceiling moldings are the proud work of a master craftsman. Even the newly-installed industrial-style pendant lights dance to the rhythm of this old house. Turning around, you step into another space, beholding with surprise a modern western-style kitchen. The black-grid storing shelves hanging from the ceiling correspond to the dark-colored bar countertop made of Taiwanese cypress. The sky-blue subway tiles on the side of the bar shine in the sunlight flowing in through the windows. And the iron window grates on the other side of the windows elegantly preserve the glamor of their golden years. 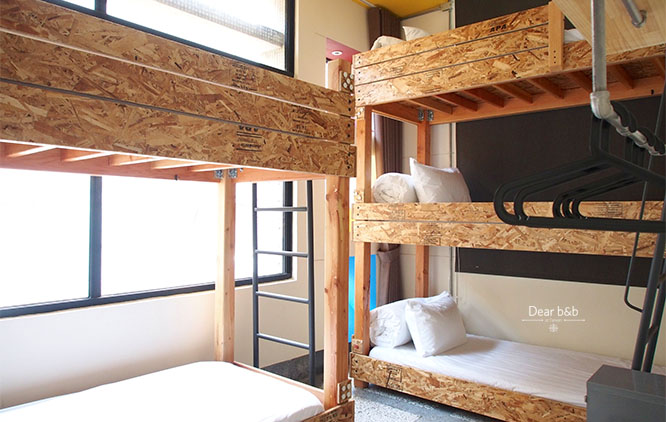 With Inn Hostel isn’t just a backpackers’ hostel, but also a refined guesthouse situated in a charming old building. As hostess Shing expressed, she was desperate to make every detail perfect. The smaller room “With” is equipped with cozy single beds and is great for solo travelers or a group of besties to recollect their school dorm memories. The customized three-tiered bunk beds in this nearly-3.5-meter-high space allow you to freely stretch your body no matter which tier you take. The bunk bed ladder fixed to the wall is designed not only for safety, but also to avoid shaking the whole bunk when you climb in and out of bed. When the hour is late, sink into the 7-cm memory foam mattress for a good night’s sleep. Or, grab a few bottles of beer and head to the small third-floor balcony with your besties, sharing the wonderful moments of your trip and enjoying the cool nighttime breeze.

If you prefer a more private stay, the only double-bed suite “With U” with its lovable loft design is right for you. The private little attached balcony is a great spot from which to appreciate the alleyway landscape. Sitting on the blue or green egg-shaped outdoor chairs, you enjoy the beautiful rays of early morning sun reflecting off the neighboring buildings. The soft sun rays penetrate through the fine iron window grates, creating shadows in various elegant patterns on the traditional red floor tiles. You notice some elderly locals strolling down the alleyway, greeting each other in an old-fashioned manner. Unwittingly, your mind follows their footsteps into the golden days of old Kaohsiung. 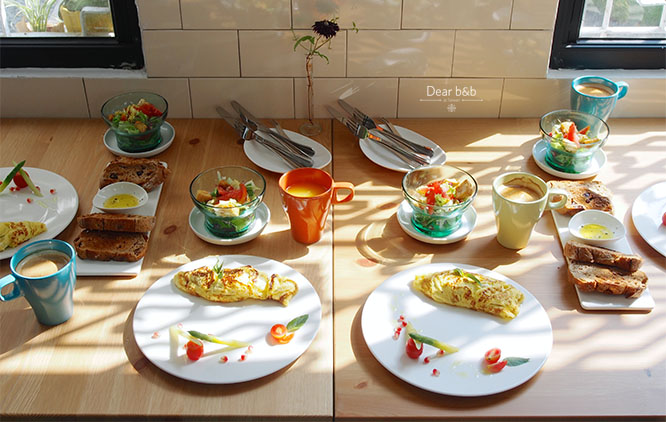 The delicious, magical cuisine of a western-style chef

Don’t miss hostess Shing’s impressive western-style breakfast during your stay at With Inn Hostel. Formerly employed in western restaurant, Shing is more than happy to share her western-style delicacies with her guests. The breakfast feast starts with a delectable salad consisting of grapefruit, romaine lettuce, red cabbage, pomegranate, cherry tomatoes, and crunchy croutons, seasoned with balsamic vinegar. The sweet and sour freshness of this dish feels like fairies dancing in your mouth, waking up your appetite. A couple of slices of whole-wheat multigrain toast, paired with virgin olive oil and rock salt, come with the salad, kickin off your breakfast with a fulfilling start.

Then comes the main course—a Lisbon-country-style omelette presented to you on a white plate like a mermaid swimming in the sea, garnished with bright red pomegranate. Gently cutting it open, the abundant filling overflows onto your plate, including tender potatoes, succulent corn kernels, cheese, bacon, sweet cherry tomatoes, and aromatic asparagus, an abundance which echoes your entire experience at With Inn Hostel.

An olden-time aesthetic invigorates With Inn Hostel, where the graceful window grates compose a charming, sun-drenched interior landscape. Here, even travelers on a shoestring budget have no risk of an unpleasant stay. With Inn Hostel ensures that all their guests rest well, preparing them to set out on yet another journey with contentment in their hearts!

Shing and Hong．Happiness is Being Together

When we arrived at With Inn Hostel, Shing, a girl sporting a short, refreshing hairstyle immediately greeted us with enthusiastic, smiling eyes. She led the way and arranged for us to sit down, all while calling up the stairs, “Hong! Hong!” A few seconds later, a young guy in casual outfit with short mustache and shy smile descended the staircase, taking our luggage from Shing. Shing then led us upstairs, excitedly introducing the old house with stories about its iron window grates, carved glass windows, terrazzo floors, and wooden pillars. Hong, following behind, joined the conversation from time to time. Step by step, we journeyed through the golden years of this lodging and emerged in the present day. 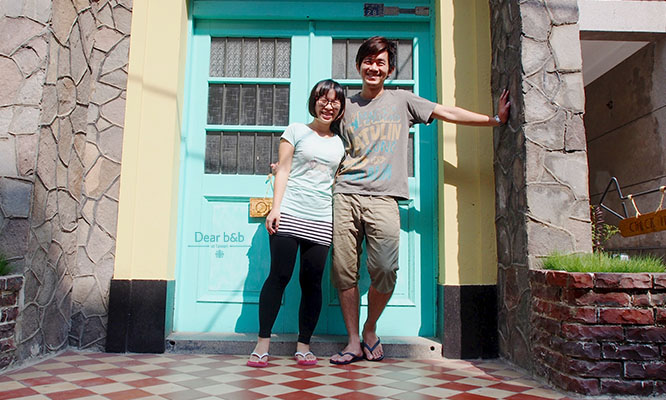 A sweet and reserved breakfast romance

Like an old-fashioned campus love story, Shing and Hong used to study in the same lab while earning their postgraduate degrees in biomedical science. On one occasion, Shing asked Hong a simple favor—to get breakfast for her the next morning. Little did she know, the considerate Hong would continue delivering morning feasts to her from that day forward. Not only did he provide a full list of breakfast eateries for Shing to choose from, Hong also took care of Shing’s friend’s needs. As time went by, Hong gained Shing’s trust and affection, and eventually won his position as her boyfriend.

However, this romance, which began in a lab, was not always easy for Hong. Worried about losing face, Shing felt awkward makinging their relationship public. During the first six months, Shing asked Hong to leave the lab through different doors, and only after they left the campus was Shing willing to hop onto Hong’s scooter. Finally, one day, their labmates revealed that they all knew about their relationship, after which Shing could finally hold Hong’s hand on campus with ease. Since then, they’ve walked hand in hand throughout the next ten years. 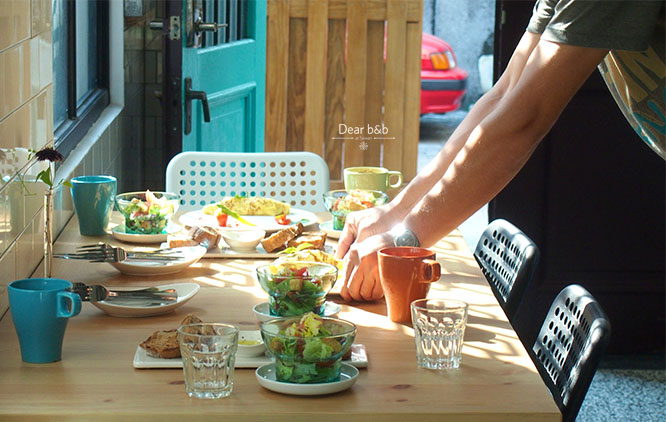 Multiple skills earned after a journey of career exploration

After graduation, instead of choosing the usual road for a science graduate, Shing joked about starting down an “easy and playful” career path. She first partnered with her older sister in opening a bakery, but had to close down due to their costly insistence on using high quality ingredients. Following that she started another business planning parties and weddings with a friend. In order to do a good job, she had to acquire knowledge on western cuisine, therefore she undertook apprenticeships in both a famous chain restaurant and a high-end French restaurant. With both theoretical and practical training, she developed a strong background in western cuisine. Moreover, she later attended a months-long professional barista course before becoming a professional barista was even a thing in Taiwan. Shing put her intense passion into every learning opportunity that presented itself and acquired a number of high-level skills.

With a soul that knows no quitting, Shing even worked for a time as a butler in a Kenting guesthouse. She treated this opportunity as if it were her lifelong career. She learned how to operate and manage a guesthouse and gained a deeper insight into the accommodations industry. In her opinion, although fancy guesthouses might always have a market, she wants to offer comfortable and convenient guesthouse-level services and facilities at hostel-level prices. What’s more, her guests should all get to savor her impressive western cuisine. This is the philosophy she maintains and the path she has chosen for With Inn Hostel.

All the while, Hong had been working solely in Kaohsiung, which seems to have not much to do with operating a guesthouse. In fact, the moment Shing decided to open her own hostel, Hong was there to accompany her in location hunting, furniture shopping, and every other conceivable task along the way. Shing said with a smile, “he has always been there supporting me!” 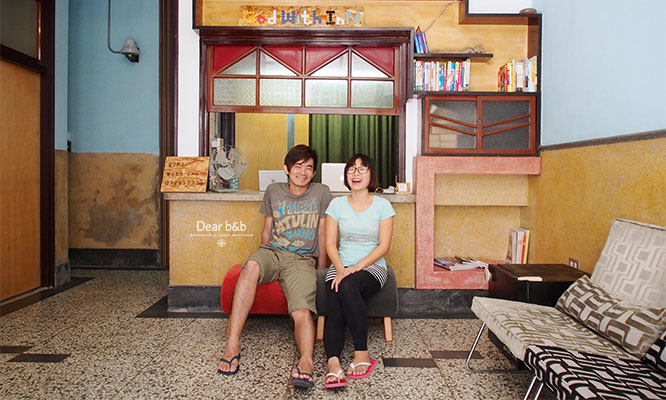 A typical Virgo, Shing is a perfectionist at work. In contrast, Hong believes that things just need to be “good enough.”. With their opposing philosophies, they inevitably quibble over the daily operation of With Inn Hostel. However, Shing always seeks to solve their conflicts with sincere communication, while Hong never fails to embrace Shing’s opinions and gently support her. She loves his tender and pure mind; he loves her persistence. Perhaps, the most essential element in their long-term relationship is their complementary personalities.

We asked them for some tips how they’ve gotten along with each other all these years, from their early campus romance to marriage. Shing teased, “because he’s easy to control!” Hong, sitting beside her, didn’t object, and just offered a shy smile. Whenever Shing finds a worn-out light fixture in a room or a shortage of essential supplies, all she has to do is call Hong, who immediately appears to solve the problem, like a planet revolving around and protecting its shining sun.

Shing told us that the reception desk in the small living area is their favorite place to hang out, because that’s where the whole family used to cook and make dough together. Just by sitting there, they feel a sense of “home.” With Inn Hostel is not just a hostel, but also a loving abode for Shing and Hong. Because after all, happiness is being together.

Breakfast included, On the 3rd floor, Shared bathroom outside the room, 1 double bed, Extra person is not allowed (more)

Enter the address for GPS navigation.